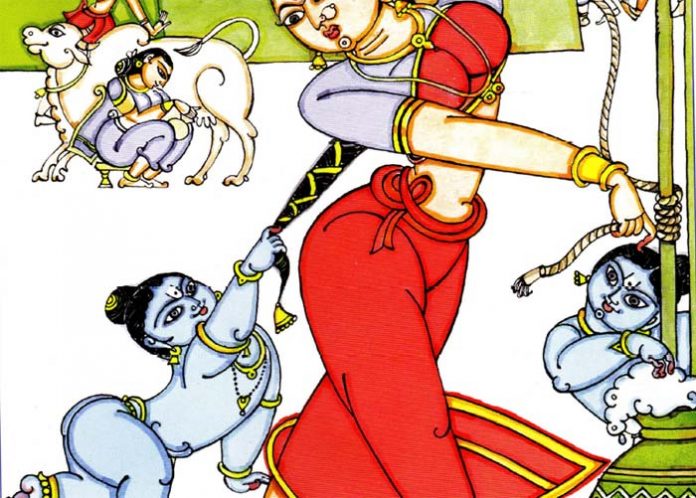 As the dozens of birds chirping together at dawn

Of lovely hands, fragrance of flowers of their hair

O, the lady of Naaraayana, get up, to lead us

To Keshava and to sing with us, His praise

Awaken, open the doors & let us go, my girl.

[Transliteration of Pashuram followed by Translation from Tamil (in bold)]

Goda in this 7th song is waking up Kulasekhara Alwaar. She sang morning song for Periyaalwaar, her father in her 6th Pashuram, which embodied the Acharya Vandana “Asmat Guru Bhyonnama” (Namaskaram to my Gurus). In this song, Goda is saying “Asmat Parama Gurubhyonnamah”. (Salutations to Guru of Gurus, ex: Kulasekhara)

Gopika at outside of doors are indicating three points to convince inside Gopika about the end of night and beginning of dawn. In 6th Pashuram chirping of birds, Conch Sound, chanting of Hari Hari by Yogis and Munis are the three sounds of the morning to be noticed. Birds are rendering great help to mankind by awakening them at right time. They do not know it, but their sounds are helping. Sankha Naadam (sound of conch) tells us that it is time to pray God. Its Omkaram that links us with God. Whereas the third sound is the chanting of Munis and Yogis which is the result of the human effort.

What is the meaning of chirping sounds of birds? Goda says, they are planning to fetch food together for their children. They can fly with two wings- Knowledge and Practice. Rishis meditate for some time, then come out to discuss with other Rishis, and they go back to penance. The chirping is nothing but such conversation, Goda says.

This Song mentions about Bharadwaja Muni and Bharadwaja birds which are found in Kerala-Tamil Nadu coastal region. These birds make sounds like Parrots.

Prince Rama during his exile, stays for a night at Bharadwaja’s Ashram (residence). Thereafter, Bharatha, with his family, Gurus, royal staff and army arrives into forest in search of Rama, and pays respects to Bharadwaja in his Ashram. Bharadwaj asked Bharath, “What else you want to do to Rama, who is innocent, harmed none: Why are you searching for him?”.

The question is full of suspicion and indictment. Bharath cries out at his feet and says: “Muni, you know past, present and future, don’t you read my mind?”.

Bharadwaja wants to test him further. He creates a spacious Royal palace for all who came with Bharata and asks him to take the King’s seat. Bharatha leaves it and goes to a nearby seat meant for the Minister and operates the hand-fan towards the Simhasana as if Rama is sitting there, imagining Him. This proved that he was not fond of occupying the kings’ seat.

Bharadwaja spent all Taposakthi to build this palace just to test the devotion of Bharata. But he was happy that a great Bhagavatottama was discovered who was the best among the devotees.

Bharadwaja uses all his Purush Ayush (300 years of life of pious man) to learn a small part of Veda Adhyana. He invokes from God another Purush Ayush to study Vedas further. He could not complete and asks for another 300 years from Prajapathi. Three terms Ayush of 300 years each was not enough for him to learn even a little of Vedas. When Bharadwaj did Tapas again, Prajapati appeared and showed there three big hills of Vedas and a morsel of earth on each Hill. He said: “in all these years you have learnt three morsels from three Hills of Vedic knowledge. Now you can stop learning and start the practice of what you gained”. To reach God, one must serve His devotee. This is a quote from Bharadwaja Samhita. Bharadwaja was trying and testing who would be such a divine devotee whom he can cultivate as a contemporary colleague, and he found Bharatha after spending all his Taposhakti & Knowledge attained in 900 years. Goda says it is not enough meditating on God, one should frequently meet the devotee.

In Brindavan, Gopikas always meditate Sri Krishna. Even when they are immersed in their daily activities, they do not forget Sri Krishna. What all they think, say, and do, they offer it to Sri Krishna. Sarvam Sri Krishnaarpanam. (Everything is dedicated to Him).

Gopikas attained Bhakti not because of their learning and knowledge. It is because of their association with Krishna in Vrepalle. Each of that village used to bring what all they made or cooked for Krishna. A mother-in-law could not tolerate this madness and to teach a lesson to daughter-in-law, she entrusted huge stock of Curds and Milk to be sold in a day. That Gopika, took the produce to town for sale and instead of shouting that curds and Milk available for sale, she was chanting Govindaa, Damodaraa and Maadhavaa, and used to sell everything easily. They got dissolved in the thoughts of Krishna.

While churning the pots of the curds with stirring instruments also they were meditating on Him. Goda is asking the Gopika, “Can you hear those churning sounds? As they churn, their bangles on speedily moving hands, and necklaces jumping on chest are making huge sounds”. And the flowers decked in their plates got loosened and spreading the serene fragrance. Goda addresses the girl inside as a leader and requests her to lead all the Gopikas to the place of Sri Krishna.

Krishna became Keshava when he killed a demon-horse in a very unusual manner. It was the demon Keshi in Horse form that attacked Krishna with open mouth. Little Krishna has inserted his hand into his mouth, Keshi was happy that he could eat the tender hand away. But that was a play (a leela) for little Krishna, who increased the size of his hand making Keshi uncomfortable. Keshi died as the hand occupied entire body.

Goda explains wider meanings through her symbolic words. Cows are Vedic sentences; their milk represents God’s beautiful form and wonderful deeds. Discovering them through Teacher and remembering them is reflected in Curds. Curd is the experience. Stirring rod relating to God, using thread of love for God, while churning is the action. The result is the mind that could be offered to God, it is like butter. That butter melts down with the heat of separation from God. Retain the butter and offer it to Krishna before you are separated from Krishna.

When Ocean of Milk was churned, three sounds emerged. 1. Sound of returning rivers as Mandhara Hill was placed in ocean as stirring rod, raising the water levels. 2. Sound that emerged while Vaasuki (Serpent) tied as rope around Mandhara and churning it. 3. Sound coming from churning caused by swirls in ocean with rotation of Mandhara in the ocean. Similarly, three sounds emerged from Gopikas- the sound of bangles of churning hands, of their song, and of swirling curds. Churning of Milk is compared with churning of milk ocean by Goda. Churning activity or making butter is the Gopikas’ penance.

Kulasekhara as threshold at Tirumala

In this Pashuram Goda is waking up Kulasekhara Alwaar. He is shining jewel among the 10 Aalwaars. He is Kshatriya, the ruling class, He is guru of guru’s = Parama Acharya. Thus today’s acharya mantra is ‘Asmat Parama Gurubhyonnamah”. When God appears and offers a boon to Kulasekhara, he sought to be a threshold at sanctum sanctorum of Tirumala Temple so that he would be looking at the God always. The threshold before Lord Venkateshwara is thus called Kulasekhara Padi, none except the ardent archakas cannot cross it.