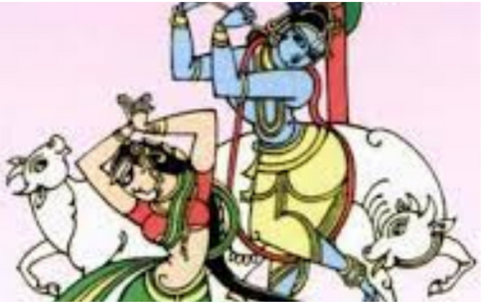 In the 14thsong (Tiruppavai of Goda) refers to TiruppaniAalwar, a great Vaishnavite, who used to be immersed totally in singing the praise of Ranganatha, with his Veena in hand. He was believed to be from Sri Vatsa on the Chest of Vishnu.

He is found in year 398 of Kaliyuga in an agriculture field of a Brahmin in Alagaapuri village near Srirangam.

But he was raised by a Shoodra. He was treated as an untouchable, and not allowed inside Ranganatha temple and on the banks of Kavari River.

According ManavalaMahamuni, the first three aalwars namely Poigai, Phootattha and Pey belong to Dvapara Yuga (before 4200 BC). At the same time, there were three Saiva Nayanmars, who influenced the ruling PallavaKings. Alwars (also spelled as Azhwars) and Naayanars generated a strong Bhakti movement to alter religious geography from Buddhism and Jainism to two sects – Vaishnava and Shaiva in South India. The verses of totally various Aalwars rendered different Paashurams, which are compiled by Nathamuni (824-924 AD), a 10th-century Vaishnavite theologian, as NaalaayiraDivyaPrabandham containing 4000 verses and the 108 temples revered in their songs are classified as Divyadesam. Naalaayiram was called “Tamil Veda” or “DravidaVeda”

Divya Suri Charitra by Garuda-Vahana Pandita (11th century AD), Guruparamparaprabavam by Pinbaragiya Perumal Jiyar, Periyatirumudiadaivu by AnbillaiKandadiappan, YatindraPranavaPrabavam by Pillai Lokacharya, commentaries on DivyaPrabandam, Guru Parampara (lineage of Gurus) texts, temple records and inscriptions give a detailed account of the Aalwars and their works. According to these texts, the saints were considered incarnations of some aspects of Vishnu. Poigai is considered an incarnation of Panchajanya (Krishna’s conch), Phootatth of Kaumodakee (Vishnu’s Mace/Club), Pey of Nandaka (Vishnu’s sword), Thirumalisai of Sudarshanam (Vishnu’s discus), Namam of Vishvaksena (Vishnu’s commander), Madhurakavi of Vainatheya (Vishnu’s eagle, Garuda), Kulasekhara of Kaustubha (Vishnu’s necklace), Periya of Garuda (Vishnu’s eagle), Andal of Bhoodevi (Vishnu’s wife, Lakshmi, in her form as Bhudevi), Thondaradippodi of Vanamaalai (Vishnu’s garland), Thiruppaan of Srivatsa (An auspicious mark on Vishnu’s chest) and Thirumangai of Shaarnga (Raama’s bow). The songs of Prabandam are regularly sung in all the Vishnu temples of South India daily and during festivals. (Dalal, Roshen (2011). Hinduism: An Alphabetical Guide. Penguin Books India, PP 20-21, and Raamaswamy, Vijaya (2007). Historical Dictionary of the Tamils. Scarecrow Press. p. 211)

Tiruppani have Sri Vatsa on the Chest of Vishnu

Tiruppani’s instincts were heavenly, and he grew as a man leaving all worldly material. With Veena (stringed instrument) in his hand, he was always singing the glories of Vishnu. Soon he became famous and his skill as a singer and ability to inspire bhakti drew audiences from afar. He was known as “Paanarperumal”. [Rajarajan, R.K.K. (2016). “Master-Slave Ambivalence in the hagiography of the Āḻvārs”. The Quarterly Journal of the Mythic Society. 107 (1): 44–60]. Because of unreasonable strictures from high caste, Paan Perumal did not come near the Kaveri river, but mostly stood alongside its banks facing the Srirangam temple and sang in praise of Ranganatha. Once he was immersed in singing where LokaSaranga priest wanted to go to carry sacred water for worship, from Kaveri.  Saranga asked him to give way. He could not hear the call because of his concentration on Ranganatha. With anger, Saranga threw a stone and went to Kaveri in a different route. Tiruppani suffered bleeding injury on theforehead, though he was unmindful of it for a while.Saranga was feeling that something went wrong.

When he entered sanctum sanctorum of Srirangam, priest Saaranga was taken aback as blood was oozing out from the forehead of Ranganatha. The Lord appeared in the dream of Saaranga and commanded him to bring Paanarto the temple the next morning on his shoulders. ButTiruppani, referring to his low birth, declined to enter the holy place. When he was told that it was the command of Ranganatha, Tiruppani was lost in a deep trance. Saaranga said that if he objects to enter the holy temple with his legs, he could carry him on his shoulders to the temple as ordained. As Tiruppani entered the sanctum, he experienced the bliss of Ranganatha and instantly composed the AmalanAdhipiraan, a collection of ten songs describing the beauty from the divine feet to the face. When he was describing the beauty of His divine eyes, he laid his life at the feet of the deity. Like Goda, this is another Alwar who was found on the earth and got merged with Ranganatha.

His verses explain how a devotee should pray at any temple. The devotee should look at the worship idol from the divine feet (Tiruvadi) toTirumudi (face) and be immersed in the Lord’s presence. Critics consider that the ten songs to be sweeter than even the melodious music of the Veena.

Prof. M. Sridhar Acharyulu
Author is Dean, Professor of law at Mahindra University at Hyderabad and former Central Information Commissioner. He published a number books in English and Telugu.
Previous articleIn sweet words you promised to wake us up
Next articleEnchanting pulled tusks, killed rogue elephant

Why the best of India’s proposition at Glasgow COP26 was not...