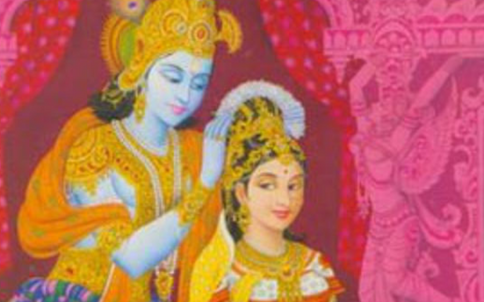 O Sweet Parrot, We are all here, Are you still sleeping?,

“We know your clever skills in talk”, “You have more skill, Me also Perhaps”.

“Join us quickly, do you have any other purpose?”, “Are all of you here?”,

“Oh, if you want, come out and count us in your corridor”,

We praise the enchanting kid that pulled tusks, killed the rogue elephant,

Come on, join us and listen to the adventures of the Little Angel.

The 15th song starts with word “Elle” which is an expression like ‘hello”, a greeting in English. Oxford English Dictionary says: “Hello is an alteration of Hallo, Hollo, which came from Old High German “Halâ, Holâ, emphatic imperative of Halôn, holôn, to fetch, used especially in hailing a ferryman”. It also connects the development of hello to the influence of an earlier form, holla, whose origin is in the French Holà (roughly, ‘whoa there!’, from French là ‘there’). As in addition to Hello, Halloo, Hallo, Hollo, Hullo and (rarely) Hillo also exist as variants or related words. In JagadekaVeerudi Katha, the write Pingali invented a word Hala, as alternative to Hello and uses it between the lead pair.

Webster’s dictionary from 1913 traces the etymology of holloa to the Old English halow and suggests: “Perhaps from ah + lo; compare Anglo Saxon ealā”. According to the American Heritage Dictionary, hallo is a modification of the obsolete holla (stop!), perhaps from Old French hola (ho, ho! + la, there, from Latin illac, that way).

Look at the similarity, much earlier Goda, or Andal of 7th Century called it “Elle” as a greeting word to begin conversation, in 15thPaashuram. We should, perhaps claim that Goda invented the first such word Elle, which now became very popularly – hello. The whole world every day uses this expression. Goda is the inventor of Elle that gradually became Hello.

Goda and other Gopikaas were waiting outside the house of a beautiful and clever lady, who heard all singing of Krishna. She started humming those tunes. It was very sweet to listen to that tune. That is why, they addressed IlanKiliye. In Tamil Kile, means the parrot. Ilan means very young. This Paashuram is composed of conversation between Goda outside and Gopika inside like many others from 6th to 14th songs. In other Paashurams conversation is partial, whereas here it is from beginning to end.

Goda: “O young parrot, we have all come for you; You know that. Are you still sleeping?” She and her colleagues wanted this Gopika to join them so that they get access to Krishna easily. They were praising her.

Gopika inside: “O friends, don’t shout with chilling effect, I say, I am unhappy as I am separated from all of you, and it is not proper for you to praise me”. She assessed that Gopikaas and Goda might be suspecting presence of Krishna with her.

Goda: “You are very clever and adept at sweet talk. We know about your satire and hard-hitting words for long”.

Gopika: “Not me, you are very clever, you are calling me efficient, but I am unhappy as Krishna is far away, whereas you are all planning to reach Sri Krishna. I know it is my mistake that I did not join you in time. Ok you are right that I am a hard-nut”.

Goda: Krishna, that wonderful person with surprising adventures, who killed Kuvalayapeedam, the rogue elephant of Kamsa, by pulling out its tusks and killing it with the same as weapons. He is a mysterious hero, who can defeat all the mischievous manipulations of enemies. He can kill the enmity among enemies. Let us all sing together about that wonderful little angel, Krishna.

Also read: O! dear wake up and Join us for Sri Nomu

They refer to Acharya as a parrot. When a person is immersed in meditation on Paraamatma, even the sweet voice of Parrot irritates him. Hence, she asks them not to make chilling sound. Immediately she says that it was her mistake not to have joined them in time. They surrender, consider them as lower or subordinate to the others. They shed the ego and tolerate the insulting words. Humility without ego is the character of a real Vaishnava.

Vaishnavas generally greet others with ‘Sarvaaparaadhini”, I am the one who committed so many mistakes…. Bharatha says, “it was my mistake, my actions in earlier Janma that caused Raama to go for exile, the mistake was neither my mother’s, nor king’s, nor Mandhara’s, but mine”.

Seetha also says she is suffering in Sri Lanka because of her own wrongs. I did a small and very big sin. Her small wrong was when Raama was disinclined to take Seetha along with him into the exile, she provoked Raama saying ironically “My father thought that he was giving his daughter to a male person”. Her big mistake was to hurt Lakshmana with her harsh words and allegations for not going to the rescue of Raama after hearing the words “Haa Seetha, Haa Lakshmana…” mimicking Raama’s voice. She feels: I am suffering in Lanka for the last ten months because of this major mistake against the devotee of Raama.  Abusing Bhagawatha is a worse crime than abusing Bhagawan Himself.

Devoted disciple of Raamanuja, Kurattalwar goes to Srirangam. It was then under the control of King Chola, who hated Vishnu and Vaishnavism. He ordered not to allow into Ranganath Temple anyone related to Raamanuja. The soldiers there explain this order to Kurattalwar but they were ready to allow him into the temple if he abandoned his relation with Raamanuja.

Kurattalwar refuses to enter the temple if the entry costs him his association with BhagavatottamaRaamanuja. He never adopted anything that is against Bhagavata’s (relating to devotees of Bhagawan) even if that is about Bhagawan.

Goda also narrates the importance of devotees in this Paashuram. Here Parrot means the Acharya who gains the same form as of Bhagawan. Sweet sounds of Parrot mean those who have great love for devotees. Goda calls Gopika inside to join them for association with the devotees.

In this part of the song, Goda pays tributes “SrimatheSathagopayanamah”. The tenth Alwar that was waken up is Tirumangai Alwar, who followed Nammalwar, as a parrot did. Tirumangai Alwar also confirms this saying Nammalwaar known as Sathagopa, taught him Tiruvaimozhi. Tirumangai slept for years, hence the reference also points to him. He was considered a divine incarnation of Shaarnga, Vishnu’s bow.

Prof. M. Sridhar Acharyulu
Author is Dean, Professor of law at Mahindra University at Hyderabad and former Central Information Commissioner. He published a number books in English and Telugu.
Previous articleTiruppani is not ‘untouchable’: One of 12 Alvars
Next articleOpen this temple filled with love for Shri Krishna