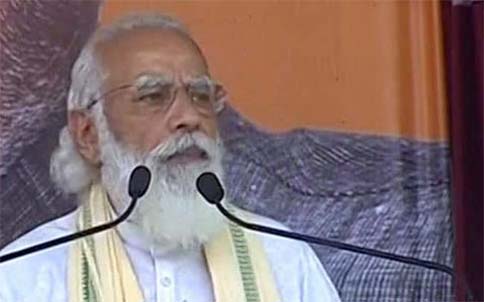 Prime Minister Narendra Modi has started his election campaign in Bihar in right earnest. He praised Chief Minister Nitish Kumar for his able handling of the Covid’s  consequences. He was addressing his first rally in the State in which the 3-phase polling is scheduled to begin on 28 October. He asked the people to vote for the ruling alliance once again saying in Hindi, “Phir Ekbar, NDA Sarkar.”

“Had Bihar government not acted fast, the pandemic would have killed many, many more. It would have been unimaginable mayhem. But today Bihar is celebrating democracy with the Covid threat behind it,” said Modi sporting a long beard.

Modi has participated in a joint rally with Nitish Kumar on Friday at Sasaram. Before Nitish Kumar came into power, Bihar under Lalu Prasad and his wife of Rashtriya Janata Dal (RJD) stood first in the country in terms of crime and corruption, alleged the prime minister. Every survey made it clear that the JDU-BJP alliance is going to win the elections,  he said. The former rulers of Bihar are now looking at the developing State with greedy eyes.

Biharis are not fools

The prime minister said people of Bihar are not fools and they would not believe incredible rumours saying that some new power is emerging in the State. Modi has claimed that the NDA government had given priority to the poor during the Covid pandemic.  He said the double-engine government has benefitted Bihar.

If the opposition is voted to power it would overturn the decision of his government to annul article 370. Such people asking for votes in Bihar is an insult to the State, the prime minister concluded.