Yashoda: An overstuffed thriller that bites more than it can chew 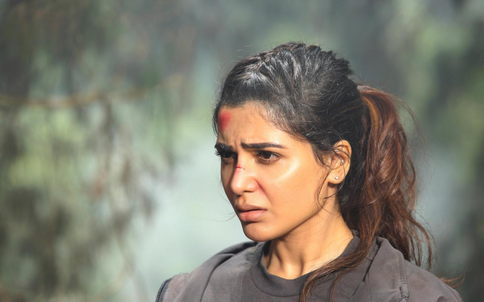 Yashoda directed by Hari-Harish is an attempt at exposing the underbelly of surrogacy through the lens of good versus evil. Generally it is the male protagonist who takes on the baddies and saves the day but here the director has a female protagonist who is entrusted with this responsibility. Yashoda’s battle is both personal and professional.

The film begins off interestingly enough with the murder mystery of a Hollywood starlet; there is also a business tycoon and a supermodel who are also bumped off in the film’s initial bits. Sampath Raj & Co are given the task of catching the murderers. Yashoda (Samantha) becomes a surrogate who is in desperate need of money. She is urged by the basti doctor to continue her pregnancy in a high-end facility called Eva. Eva is owned by Madhu (Varalakshmi Sarathkumar). There is also Dr Gowtham (Unni Mukandan). This facility is luxurious in every sense of the word. It is a dream come true for any pregnant woman; however things are not what they appeared to be. Yashoda is also not the helpless woman that she appears to be in the beginning. She has been sent by someone to bust Eva. Additionally her young sister is also trapped in Eva. Yashoda soon starts her secret investigation and this leads to tumbling of several secrets.

The murder mystery and the track of Samantha go side by side leading to some unexpected twists which are quite engaging. But the missing aspect is a tight screenplay to bind things together.

Also read: Urvasivo Rakshasivo: A refreshing romantic drama which belongs to the heroine

Yashoda starts off on a high until Samantha reaches Eva but soon starts stagnating. The major reason for that are her Eva inmates and a forced attempt to show a bond between Samantha and them. These inmates have their own reasons to become surrogate mothers; however the problem is that audiences don’t feel anything for them. The humor also comes across as rather unwanted.

Things take a turn for good when Samantha gets into her investigative mode. Of course, suspension of belief is needed here in terms of how easily Yashoda investigates in spite of the secret cameras and the tight security. The interval bang is very exciting indeed.

The second half starts off promisingly with the back-story of Varalakshmi Sarathkumar. Her back-story looks at the concept of beauty consciousness and the society’s obsession with the outer exterior. Madhu is a woman who never wanted pregnancy as it would ruin her beauty. However, there is a major issue in terms of how she has been portrayed. Through her character the director duo reinforces the stereotypes of how a woman who doesn’t want to become a mother must invariably be an abnormal psychopath. This hardly leaves space for any nuance.

The pre-climax twist of Yashoda being policewoman and also Murali Sharma being a negative character does come as a surprise. The ending has an emotional high. However the elongated fight scenes test the patience of the viewers.

Samantha in the title role gives her blood and sweat and is easily the biggest reason why you stay with the film. She pummels the bad guys with conviction and also adds a certain gravitas to the emotional scenes. Varalakshmi Sarathkumar makes for a great antagonist; however she comes across as rather helpless in the climatic portions of the film. Unni Mukundan also makes a solid impression as Madhu’s partner in crime. Sampath Raj, Murali Sharma and others are good in the space that they have been given.

Music by Mani Sharma is just functional but the background score is good. The cinematography by M. Sukumar deserves distinction marks for a job very well done.

Final word: Yashoda is a treat for Samantha fans and an interesting experiment but that is not enough for this to sail through.

Prabhatha Rigobertha
Rigobertha Prabhatha has been writing on movies, web series, books, etc. on social media platforms like Facebook for a few years. He has a YouTube channel "prabhathalovesmovies" in which he posts video reviews. "I have only two windows to my world - movies and books" reads it's tagline. He is a student of English literature and currently working as Content Writer at Pudami Publications based in Hyderabad.
Previous articleThe romance of train journeys
Next articleMonica O My Darling: A noir thriller that keeps you on your toes

Pagglait movie: A story which is much more than just about...