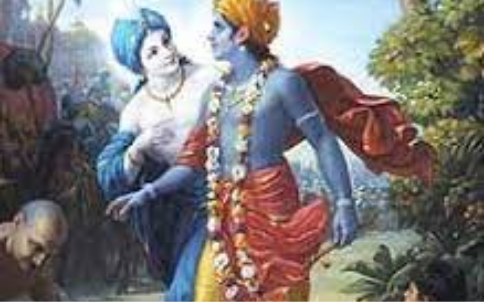 In a mountain den, the fierce Lion

Spending winter in sleep with lioness

Straightened fragrant hair to all directions,

Stretching the mane, with a roar for starting

as blue lotus eyes shine, is stepping out with a bang.

From your abode towards the divine

Throne exquisite, to settle on and bless us.

Lord Krishna of eternal enchanting bluish hue and the shine of the Kanuga flower is arriving now like a fierce Lion who just woke up from its four-month-winter-hibernation in the mountain cave. He opened fiery, flashy eyes, shook up limbs vigorously, ruffled mane in the action, stood upright and stepped out with a mighty roar. Welcome from your Bed-Chamber to the exquisite and well carved Throne- Singhasan, and settle on it to consider the purpose of our visit and bless, Krishna.

Sri Rama, after killing Vaali and handing over the dynasty to Sugreeva, spent all the rainy season in Malyavantha Guha along with Lakshmana.  He comes out to alert Sugreeva to start searching for Seeta.

On 22nd Day, Gopikas wanted the cool and kind glances of Sri Krishna, asked Him to gradually open the eyes. Neela led them to Him. He felt that He should not have neglected them. He saw them and asked “what do you want’. Gopikas said we want to experience the sight of your approach towards the Singhasan like a Lion, and He moves on.

First Goda describes how Vrata has to be performed. The terms and conditions include pure mind, no indulgences, offerings of flowers and prayers through the Lord’s songs, praise and chanting of His names through our lips and with all enveloping thoughts of the Krishna in our minds.  She says that this kind of worship, the rains and prosperity will be bestowed on the land and the people, in the first five Pashurams 1-5.

In the second part, Goda goes on waking up the ten girls, with unique qualities, showing many signs of the dawn and conveying the objective of worshipping and explaining the glorious attributes, valour, and virtues in songs 6-15.

Then, Goda approaches the abode of Krishna, seeks permission of door keepers, wakes up Nandagopan and mother Yashoda, enlists the support of NappinnaPirattiin six pashurams – 16- 21. Next, Goda and Gopikas pray to Krishna to wake up in Songs 22-23.  In Song 17 the mantra and its artha (meaning) were explained, invoking Lakshmi’s kindness in Song 18 and in 19th song, Goda says there is no alternative to Gopikas other than reaching out to Narayana; in Song 20 Gopikas explain that they have shed self-love; they declare their eligibility in Song 21 and request for considering their prayer in song 22.  In 23rd song, Krishna moves like lion and reaches Singhasan.